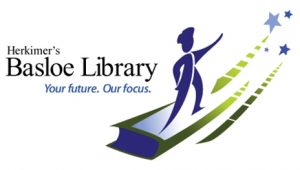 We are a welcoming place that serves our community in its pursuit of knowledge, information, and personal growth.

The Frank J. Basloe Library opened to the public as the Herkimer Free Library in 1896. It was chartered by the Board of Regents of the State of New York on November 21, 1895 as an association library to be managed by a Board of Trustees. The library building at 215 North Main St. was the former home of Judge and Mrs. Robert Earl, who donated it, the library furnishings, the funds for cataloging and an endowment for books and most of the 3,500 books for the opening day collection.

In September of 1969, the library was re-chartered by the New York State Board of Regents as the Herkimer Library, changing from an association library to a village municipal library. The Library was then managed by a board of five trustees, with appointments and vacancies filled by the Village Board at the recommendation of the Library Board.

The Library, with the assistance of the village, purchased the former supermarket at 245 North Main St. in 1974, and moved in 1975. The children of Frank J. Basloe were major contributors to the project, and the building was named for him. The Washburn Memorial Corporation donated as well, resulting in the dedication of the Washburn Room, available for educational programs and meetings in the library.

A renovation and expansion in 2001 resulted in a new children’s room on the northeast corner of the building. Computers were added to the library’s collection, with 10 available for patron use. The library began offering free wi-fi for computer users. In 2012, the library underwent repainting, and received new murals in the children’s room, a new carpet, and some additional shelving. For many years, patrons have been able to peruse the library catalog online and order books. E-books may be borrowed for various tablet readers without leaving home, and magazines have been added as electronic transactions. A donation of genealogical materials and the assistance of Evelyn and William Arthur resulted in the naming of the genealogical collection in memory of Mrs. Arthur.

In May of 2013, the Basloe Library submitted for vote a proposition that would change the library to a special district library. This special district would serve the same geographic area as the Herkimer School District. This change was approved by voters, and in December 2013, the library was re-chartered by the New York State Board of Regents as a district library. In due course, the municipal library was dissolved. The library’s funding as a district library is supplied by a tax and is collected by the Herkimer Central School District. However, the entities are, and remain, separate bodies, governed by different boards.

The library is now governed by a board of five trustees, each elected for five years, with terms expiring one per year for five years. A president, vice president for finance, and secretary are chosen at the annual organizational meeting in July. The board also has created a treasurer’s position held by a non-board member for oversight of financial matters.

The Library Board meets monthly. Minutes and other documents can be found here. Visit the Frank J. Basloe Library on Facebook.

Sign up with Wowbrary to receive weekly emails notifying you about our newest books, DVDs, and audiobooks.